A recent article in the Trout & Salmon magazine presented very interesting figures on the relative scale of Sport Wales’ funding for the promotion of game fishing versus canoeing. The startling disparity illuminated by the article showed 450% more money being granted to canoeing, over that which was spent on developing angling. Based on the huge increase in canoe traffic on the Spey, Tweed and Tay over recent years, it would surprise no salmon fisherman to learn that such a disparity in spend is very probably of equal measure in Scotland. This raises two questions, one of fiscal responsibility and the other of a more ethical nature. We must ask; “Is canoeing potentially worth more than four times the value of fishing to the Scottish economy?” And, “Is a proportional increase in canoe traffic fair and in balance with the interests of fishers?”

I strongly suspect that the current survey of the value to Scotland’s economy attributable to game fishing (SCSTG and SNH) will show that fishermen contribute a very large number to the rural economy. I have no knowledge of a similar survey being carried out in respect of canoeing. However, given that by its nature canoeing is perhaps at best a one-day exercise that may feature one or two times per year in the family calender, the direct revenues from canoeing will be small. Furthermore, while it is quite normal for fishermen to take “fishing holidays” of several days or weeks duration, I would suggest that it is far more likely to be the case that canoeing is an activity which may be enjoyed by families, groups and individuals who are already on holiday. In other words, for fishermen, it is the fishing itself which draws visitors to Scotland in large numbers. Whereas for the holidaymaker who is visiting Scotland anyway, canoeing is more of a casual or incidental experience. On the basis of these observations, my answer to the first question is an emphatic No. This disproportionate spend on canoeing is in my opinion completely unjustified and misplaced.

The answer to the second question is more subjective and emotive. I would be lying if I were to say that I welcome the sight of a flotilla of canoes paddling around the bend in the river just as I’m about to put a fly through the “hot spot” I’ve deliberately left undisturbed all morning. The presence of canoes can be irritating. However, perhaps somewhat controversially amongst my peers, I do not believe that a campaign of hostility toward canoeists is proportional to a few minutes irritation. In truth, the fish will not be disturbed for more than perhaps a few minutes by the passing of the canoes. Furthermore, in my experience, 99% of the canoeists are polite and friendly and will follow whichever route through the pool is requested by the fishermen. To my mind, I can see very little harm and a lot of good in sharing the river with responsible canoeists. Anything which encourages families and particularly children, to engage with the countryside can only be to our shared benefit. Who knows, the sight of a salmon leaping a few feet from their boat might just plant a seed in the mind of a youngster that actually, fly-fishing for salmon might be something that they want to try some day?

Scotland’s rivers are not and should not be the exclusive preserve of the fishermen. We do ourselves and others an injustice to show hostility and negativity towards those who would share our enjoyment of being on the river. However, it is certainly the case that pragmatically it makes much more sense to support to a greater extent that activity which has the potential to contribute most to the Scottish economy. Rather than spending vast amounts to promote canoeing, these monies should be directed toward preserving stocks, reducing exploitation at sea and in the estuaries and improving habitats. That would be the solution which is both fiscally responsible and ethical. 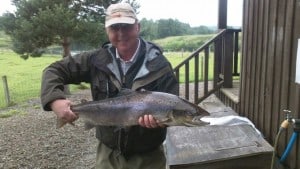