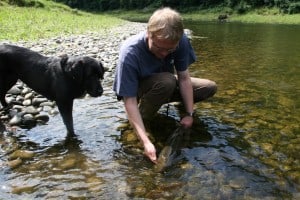 Here’s another way to turn your day’s catch into dinner. Once again this recipe comes from our friends at Colstoun Cookery School

For the sesame and honey-coated vegetables:

Here at River & Green we like to practice what we preach which means that, depending on the season, there’s a lot of fish and game on the dinner table. Sometimes however, even we run out of ideas, so here’s a delicious and easy salmon en croute recipe courtesy of our friends at Colstoun Cookery School :

We are all aware that the Covid-19 pandemic is causing an unprecedented level of disruption to business and social life, globally. The effects are being felt particularly acutely in the travel and tourism sector. In light of this and the uncertainty created, at River & Green we have developed a policy of issuing bulletins to try to give some guidance to our clients. The bulletins are based on the latest UK Government orders and advice and will be issued to those clients whose holidays begin within the next 60 days. In this rapidly changing environment, our advice is likely to be revised and refined on a frequent basis. We will email you again, every time that the guidance is amended. Please click the link below for more information